A Harmful Legacy: 7 Reasons to OPPOSE Tom Vilsack's Nomination for Secretary of Agriculture 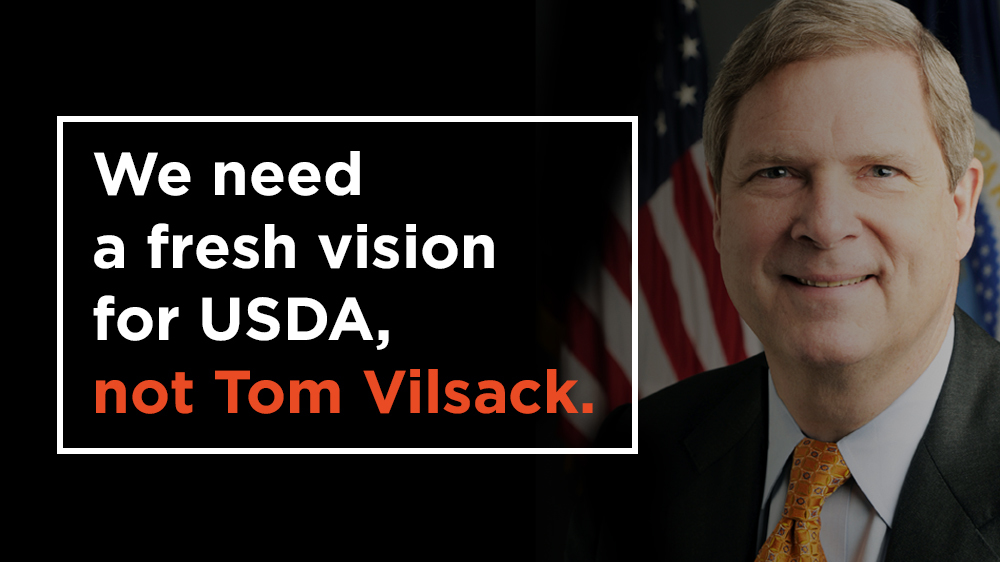 A Harmful Legacy: 7 Reasons to OPPOSE Tom Vilsack's Nomination for Secretary of Agriculture

The nomination of former Iowa Governor and former Agriculture Secretary Tom Vilsack for President Biden's Agriculture Secretary is a huge step backwards in our urgent need to support agricultural systems that protect public health, the environment, and mitigate the ongoing climate crisis. His nomination will be voted on by the Senate Agriculture Committee on February 2nd and at a full Senate confirmation vote later in the month. Read our blog below, then take action here >>

In 2011, the Center for Science in the Public Interest petitioned Vilsack, asking USDA to publicly declare the most dangerous strains of Salmonella "adulterants," and to prohibit the sale of any meat containing them. Vilsack's Food Safety and Inspection Service refused to develop new regulations and, as a result, salmonella has caused thousands of hospitalizations, hundreds of deaths, and the proliferation of antibiotic resistant Salmonella strains. In addition, Vilsack's USDA prioritized industry interests over public health by killing the Microbiological Data Program (MDP) which, at the time, provided the only meaningful harvest time testing of fruits and vegetables in the United States. Notably, for the last three years of the Obama administration, Vilsack had no appointed head of food safety.

2. Promoted Widespread Use of GMOs

Even before becoming Secretary of Agriculture, Vilsack was hailed for his aggressive promotion of genetic engineering. He even won the Biotechnology Industry Organization (BIO) Governor of the Year award twice. As Secretary of Agriculture, Vilsack was able to use his power to push through the approval of several genetically engineered crops with little to no scientific oversight. On the subject of USDA regulating genetically engineered animals and insects, Vilsack ignored recommendations from his own Inspector General. Vilsack's USDA proposed further weakening GE crop oversight, which is already far too lax. In 8 years, his USDA sided with GE crop/biotech interests, and against the interests of conservationists and family farmers, in every single public interest case attempting to halt GE crop harms or have them better regulated. Further, after a GMO labeling bill was passed by Congress, Vilsack used his power to weaken regulations and wording requirements, limiting transparency in our food supply by replacing the widely-used term "genetically engineered" with "bioengineered."

Vilsack's USDA approved scores of herbicide-resistant GMOs that have driven a huge increase in the amount of weed-killing pesticides sprayed in U.S. agriculture. Ignoring numerous warnings from farming groups, scientists, and NGOs, USDA signed off on GMOs immune to the volatile, drift-prone herbicides dicamba and 2,4-D, developed by Monsanto and Dow.

USDA's approval of Monsanto's dicamba-resistant crops in 2015 led to a huge increase in the herbicide's use, and massive drift damage to millions of acres of crops, trees, and home gardens across the country. Dicamba damage cost victims of drift many millions of dollars in lower yields and lost harvests, and turned neighbor against neighbor, tearing apart the fabric of rural communities. Researchers at the University of Missouri found dicamba in rainwater at higher levels near sprayed fields and in the air for 72 hours after application. The National Cancer Institute has found that dicamba exposure increases the risk of liver cancer.

Starting in 2009, Vilsack supported methane digesters as a way to reduce greenhouse gas production from manure lagoons in big dairy and swine CAFOs (Concentrated Animal Feeding Operations). As a result, in 2014, through the Environmental Quality Incentives Program (EQIP), the taxpayer-funded Farm Bill directed half of EQIP money to CAFOs without requiring any evidence of digester efficacy in reducing methane release.

With no appointed head of food safety, Vilsack named Food Safety and Inspection Service (FSIS) Administrator Al Almanza as Deputy Under Secretary and left him to his own devices. Almanza, who later went on to work for the Brazilian meat firm JBS, promoted industry-driven policies like the highly controversial privatization of meat inspection and line speed increases for chicken industry slaughterhouses. Vilsack supported these policies, citing them as opportunities for the USDA to save money and the poultry industry to increase their profits. Despite protests from worker safety advocates citing higher risk of injury to workers, Vilsack's USDA continued with the semi-privatization scheme. This set the precedent for future USDA leadership to allow faster line speeds which the Trump administration obliged, increasing speeds across the industry from 140 birds per minute to 175.

While he could not have foreseen the consequences of COVID-19 as they unfolded in meatpacking plants, lack of oversight at Vilsack's USDA set the stage for meatpacking workers' plight before and during the coronavirus pandemic. Because faster line speeds require workers to be closer together, poultry plants with line speed waivers have been found to be 10 times more likely to have COVID-19 cases than those without. Vilsack's leadership catalyzed the conditions in which workers are at higher risk today.

At the end of Vilsack's term, he wrote a Medium article highlighting the great work his USDA had accomplished regarding civil rights, ushering in a new "Black renaissance" in agriculture. Subsequently, many of the claims made and reiterated by Vilsack and Joe Leonard, his Assistant Secretary of Civil Rights, have since been refuted. A two-year investigation revealed Vilsack's USDA used census data in misleading ways to suggest there was an increase in Black farming during his tenure, the opposite being true. Further, not only did Vilsack's USDA employees foreclose on Black farmers with outstanding discrimination complaints, they also threw out new complaints and misrepresented their frequency. In addition, Vilsack's USDA sent a lower share of loan dollars to Black farmers than it had under President Bush.

Of particular note is Vilsack's firing of Shirley Sherrod, a Black farmer and Georgia civil rights leader who worked as USDA's Georgia State Director for Rural Development. In careless judgement, Vilsack impulsively terminated Sherodd after Breitbart, the right-wing news website, released footage doctored to portray Sherrod as anti-white. Although he later apologized and offered Sherrod a new job (which she declined), Vilsack's re-emergence as Biden's USDA pick has "enraged many farmers of color who say his record on civil rights should have disqualified him from the job."

Early on during the first Obama administration, Vilsack's USDA and the Department of Justice promised to investigate harmful concentration in agricultural industries—seed, poultry and other livestock—and restore competition. Grain farmers who suffered from astronomical seed prices and lack of non-GMO options, livestock farmers forced to operate under oppressive contracts with industry behemoths that left them next to no freedom and even less profit—they told their stories, full of hope for change, to USDA-DoJ officials at hearings held across the country. The original goals were to restore competition, moderate input prices, and reign in abuses by corporate livestock firms. In the end, virtually nothing was accomplished. For instance, Vilsack's USDA made a promise that the Grain Inspection and Stockyards and Packers Administration (GIPSA) would finalize a rule to promote competition in the livestock and poultry industries. Eight years later, when Vilsack left the USDA, that rule had not been finalized. As a result, this gave Trump's new USDA head Secretary Sonny Perdue, who Vilsack backed, the opportunity to gut the proposed rule and defund GIPSA.

In 2010, Vilsack promised the USDA would investigate why most of the income from dairy landed in the pockets of big processors. The investigation went nowhere, permitting Big Dairy to grow bigger and displace family farmers. At the same time, Vilsack appointed Dairy Board members, many of whom continue to serve. After his term in office at the USDA, Vilsack used these connections, and was hired by the Dairy Board as the Dairy Management, Inc. Executive Vice President and CEO of the US Dairy Export Council.

For these reasons, Center for Food Safety and dozens of other organizations strongly oppose the nomination of Vilsack, a revolving door politician whose decisions at USDA greatly harmed the environment, workers, food safety, Black farmers, and industry competition. If Vilsack is confirmed by the U.S. Senate, the Biden-Harris administration's reincarnation of a Vilsack USDA will inherit scandals rooted in Vilsack's past poor decision-making.

We need a fresh vision for USDA, not Tom Vilsack. Ask your Senators to oppose his nomination. Take action now >>