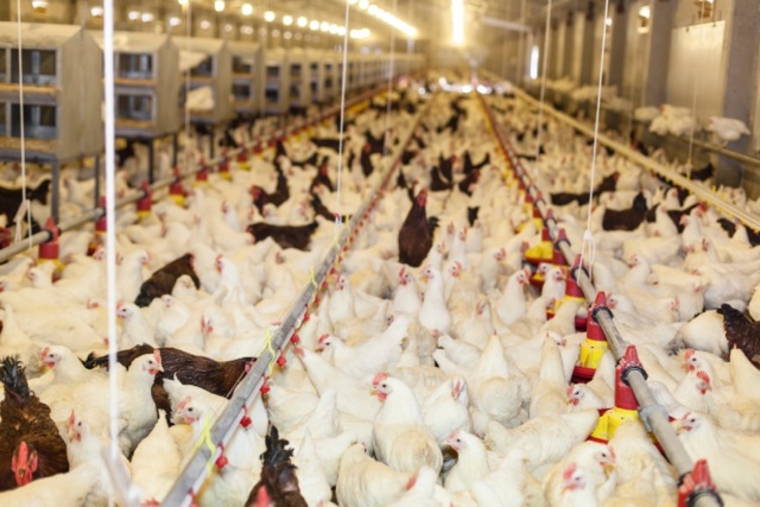 1944 was a big year for arsenic.  That year, Carey Grant garnered laughs in Arsenic and Old Lace by playing the nephew of two “crazy” aunts who used the poison to kill lonely bachelors.  Unfortunately, the box office hit coincided with a much more serious plot twist for arsenic: the United States Food and Drug Administration (FDA) approved its use in animal feed.  While the movie is now a relic of classic Hollywood, the ugly legacy of arsenic in animal feed lives on in our food supply.

Since arsenic was first approved, FDA has allowed more than 100 different arsenic-based compounds (arsenicals) to be used in feed for broiler chickens alone.  Today, out of the 8.5 billion chickens in the United States that are raised for food, an estimated 70% are fed arsenicals at some point in their lives.  Arsenicals are approved for both therapeutic and non-therapeutic use, meaning they can be added to animal feed without a prescription and for non-medical reasons such as to increase weight gain, improve feed efficiency, and even to improve the animals’ coloring.  Like antibiotics, they can also be used to manage the harmful effects of the crowded, stress-inducing, disease-spreading conditions of factory farms.

By now most of us are familiar with how industrially-produced chickens are grown and handled, so the use of chemicals and antibiotics may be nothing new.  However, unlike antibiotics, arsenic is a known human carcinogen.  It has been proven to lead to skin and lung cancer, and may also cause liver, bladder, kidney, and colon cancers.  Considering the severity of its effects, most consumers probably assume that FDA is regulating its use.  But that’s not entirely true.  While FDA does set “tolerance levels” for arsenic in food, it does not collect data on arsenical sales or use, nor does it have an effective testing program.  Instead, FDA relies on the Department of Agriculture’s testing service, which does not always test for arsenic.  When arsenic testing does take place it’s limited to a very small number of samples, and even then the samples are taken from the liver and kidney instead of the part of the animal that people most often eat: the muscle.

Unfortunately, meat from factory farms is the most prevalent meat in our food supply, which puts the majority of meat-eating Americans at risk.  Independent testing by the Institute for Agriculture and Trade Policy revealed that 55% of chicken sold at supermarkets and 100% of “fast food” chicken contains detectable levels of arsenic.  No need to worry about your enemy trying to poison you—we are literally feeding ourselves the toxic arsenicals that are being fed to the animals we eat.

The use of arsenicals is even more concerning because the effects go beyond meat-eaters and consumers of industrially"‘produced foods.  An estimated 75% of the arsenic fed to chickens passes through them and ends up in their litter, which is then applied as fertilizer on farm crops, made into pellets that can be used for home landscaping and gardening, or incinerated and released into the air.  The dust from arsenic-laced poultry litter even ends up in homes in neighboring farm communities.

In 2009, in response to this serious threat to human health and FDA’s failure to stop it, Center for Food Safety (CFS), the Institute for Agriculture and Trade Policy, and several partner organizations filed a legal petition with FDA asking it to withdraw its approval of the use of arsenicals as feed additives for animals produced for human food.  That petition was filed in 2009, yet to date FDA has not responded.  In the meantime, in 2011 FDA issued a final report concluding that chickens fed the arsenical Roxarsone had much higher levels of arsenic in their livers (which people can eat) than chickens that were not fed Roxarsone.  Later that year the makers of Roxarsone voluntarily withdrew their product from the market, and FDA acknowledged that it presented a “completely avoidable exposure to a carcinogen.”  Yet still, FDA continues to approve the use of arsenicals in animal feed, even with the knowledge that it unnecessarily exposes consumers to an increased risk of cancer.

That’s why CFS and partner organizations filed a lawsuit this week asking the federal court in the Northern District of California, to force FDA to respond to our legal petition.  FDA must explain why it continues to approve the use of arsenicals in animal feed even in the face of evidence of its harms to human health.  As Carey Grant said to his arsenic-wielding aunts in Arsenic and Old Lace, “It’s not only against the law, it’s wrong!”  This time, it’s not just a Hollywood ending—the arsenic use must stop.