The "Organic" Process Behind the Label 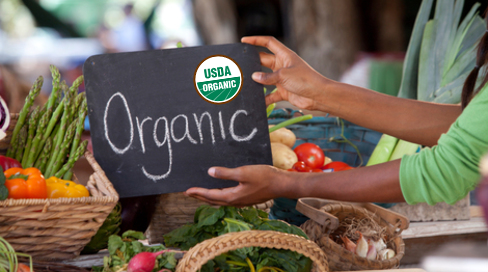 You may know that foods carrying the United States Department of Agriculture (USDA) Certified Organic label are produced in a way that works with natural systems, promotes land and animal health, and protects natural resources. What you may not know is that the regulations for organic food and farming have also been developed “organically” through substantial public input and engagement.

The National Organic Standards Board (NOSB), an independent advisory committee of the organic program and the cornerstone of public participation in organic, is currently holding its biannual meeting in Washington, D.C. Center for Food Safety has been participating in the NOSB process from the beginning, advocating for strong standards and providing current research on materials and practices that promote high integrity in organic.

From its inception, Congress designed the organic program in a way that cultivates input from diverse stakeholders, encourages continued public engagement with the process, and promotes the sharing of knowledge and information. Through this participatory process the U.S. organic industry continuously improves, and the standard and quality consumers expect from organic products is maintained.

The Organic Foods Production Act of 1990 (OFPA) created the NOSB, incorporating a mandate for public-private partnership in the very body of the organic law. The drafters knew that organic producers, along with public interest representatives and environmental protection advocates, should be actively involved in the development of the organic certification process, the composition of the NOSB, and “every other major aspect of the program.”[1] In this way, the organic law and the organic rules to follow were driven by both organic farmers and consumers.

The intent was always to have the public continue to shape the standards as the industry developed. Kathleen Merrigan, one of the key drafters of the law before going on to become U.S. Deputy Secretary of Agriculture, said:

“The statute embraced and elevated the concept of public-private partnership. The NOSB was carefully chartered by Congress to facilitate both a valid consensus among diverse stakeholders on the numerous questions of interpretations as well as provide a special gatekeeper role in respect to substances that are put on the National List that are used in organic production and processing.”[2]

Merrigan rightfully called public-private partnership a “bedrock principle” of organic.[3] To this day, the participatory nature of the organic standards drives continuous improvement in the industry. The NOSB’s 15 stakeholders representing organic producers, consumers, processors, environmentalists, and scientists, meets twice a year to discuss critical issues, review materials that should be allowed or prohibited, and listen to public comment. The location of the meetings changes each time, rotating around the country to facilitate input from regionally diverse stakeholders. And before each meeting, members of public are encouraged to submit comments online or by mail on any or all agenda items or additional items of concern – for the current meeting, nearly 3,000 comments were submitted online!

A key issue for discussion at this week's meeting focuses on Genetic Engineering (GE) and other new technologies that are excluded in organic agriculture. GE is currently a prohibited method and the overwhelming majority of the organic community wants to keep it that way.  Moreover, we also have strongly advocated that more recent variations on genetic engineering (i.e. synthetic biology and CRISPR) also be prohibited and will urge the NOSB to support that position.

Based on public input, the NOSB makes recommendations to the USDA’s National Organic Program (NOP), and NOP uses these recommendations to draft the various rules and standards that organic producers and processors must follow. The public’s role does not end with NOSB, though. When a new rule is proposed, there is an additional opportunity for public input before it can be finalized. For example, an opportunity to comment is open right now on the proposed animal welfare requirements for organic livestock and poultry producers. When NOP published its first two rules, the enormous amount of public comment received “demonstrated the intense public interest…and established the expectation that everything we do in this space involves active public participation and transparency.”[4]

Recently, however, NOP has ignored NOSB’s critical advisory role, dismissed public participation, and begun acting unilaterally on important organic regulatory issues. Such actions not only undermine the participatory foundation of organic, but they are also unlawful.  In order to protect the integrity of organic, CFS and a broad coalition of organic stakeholders were forced to litigate on two recent NOP decisions. Continued, rigorous public engagement is critical to ensure that all regulatory actions by NOP comply with the mandates of the organic law.

The organic program serves as a model of successful public-private partnership and government transparency. The fact that transparency and participation are written into the legal framework for organic makes it a unique system of food production. Thousands of consumers, producers, certifiers, and organizations engage with NOP and NOSB each year, weighing in on how to make organic an increasingly strong, environmentally-friendly, and sustainable way to feed the world.