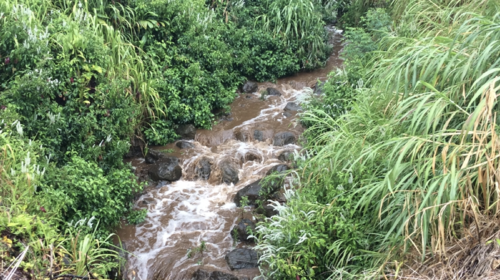 Big Island Dairy’s website features a picture of barns beneath a clear blue sky, surrounded by lush, green pasture, with words like “local” and “fresh” describing the milk it produces. The pictures on the Dairy’s Facebook page similarly show dairy cows out in rolling hills of green pasture. Unfortunately, this image of pastoral bliss is not the reality facing the Dairy’s neighboring community of Ookala on Hawai‘i’s Big Island.

Big Island Dairy is not your typical local family dairy, it’s an industrial megadairy operated by the Idaho-based Steven and Derek Whitesides—who reside full time in Idaho—where they also own and operate another large-scale industrial dairy. The Whitesides purchased the facilities from a pre-existing dairy back in 2012 and since then have rapidly expanded its operations in order to maximize profit. As of April 2017, Big Island Dairy had more than 2,600 cows onsite. Despite pictures of cows in pasture on its Facebook page, the Dairy actually confines all of its active mature milking cows—the vast majority of the Dairy’s herd—indoors full-time.

The federal Clean Water Act defines a “concentrated animal feeding operation,” more commonly known by the acronym CAFO, based on the number of animals in confinement. Given the size of its operation, Big Island Dairy is regulated as a large CAFO under the Clean Water Act, and the discharge of animal waste from the Dairy’s hundreds of dairy cows is subject to the Act’s permitting requirements. But, the Dairy never obtained a permit for its CAFO operations.

No one knows those risks better than the community of Ookala, whose residents reside just downhill from the Dairy’s operations. The Dairy is supposed to collect and use all of the animal feces and urine generated by its cows onsite, by composting manure, applying it to the croplands, and storing liquid manure in at least two onsite storage lagoons. Instead, residents of Ookala have witnessed brown murky water smelling of animal feces—and which testing confirmed to contain high levels of dangerous bacteria—flowing from the Dairy into the community’s waterways, and ultimately into the Pacific Ocean. They have also observed the dairy spraying liquid manure on its crops during high-wind days, or immediately before or during rainfall, leading to increased runoff and drift. Animal waste from large CAFOs, such as Big Island Dairy, contains a myriad of pathogens and dangerous fecal coliform and E. coli bacteria.

And that’s not all: Big Island Dairy has a documented history of jeopardizing the local environment.

In 2014, after receiving a complaint of smelly brown water flowing into a local stream, the Hawai‘i Department of Health inspected the Dairy and ultimately confirmed that cow manure from the Dairy had contaminated local streams. In a December 2016 inspection report, the Department noted that the Dairy’s lagoon systems were so poorly maintained that there was “a high potential” of discharge. The Department also noted other troubling operational practices, including burying dead cows directly into an open pit in an existing gulch on its property that ultimately flows into local waterways, and unsafe storage and handling of toxic chemicals. Public records obtained from the State of Hawai‘i also show that the Dairy stores composted manure solids on an uncovered, concrete-padded loading area in close proximity to local streams.

Apparently unconcerned, Big Island Dairy continues to endanger the local community and the environment and the local community’s repeated efforts to get the industrial Dairy to stop contaminating local waterways have fallen on deaf ears.

The local community has had enough and, joining forces with the Center for Food Safety (CFS), is taking action. Even after CFS and the local group formally sent Big Island Dairy a notice of intent to sue on April 28, 2017, local residents continued to observe animal urine and feces flowing into local streams from the Dairy, prompting the groups to file a supplemental notice detailing the additional incidents of contamination. At a community meeting in May 2017, when asked if he would promise not to spray liquid manure over the crop fields under adverse weather conditions to reduce runoff and drift, Steven Whitesides, one of the owners of Big Island Dairy, refused to make that promise.

The inertia doesn’t stop with the Dairy: neither has the State of Hawai‘i taken adequate action to stop Big Island Dairy from polluting local waterways. The Department of Health has, on numerous occasions, found that the Dairy’s operations put the community and the local environment at risk, but it was only after the community groups sent the first formal notice of intent to sue that the Department of Health finally issued the Dairy a notice of violation. However, the Department’s eleventh hour notice only concerned one specific incident of discharge from one area of the Dairy’s operations. It does not address the multiple problems with the Dairy’s mismanagement, and has not stopped the Dairy from continuing dumping animal feces and urine into the waters of Hawai‘i.

It’s a shame that the local community has been forced into litigation to resolve their concerns, but residents will not stand for this blatant law-breaking, nor the pollution of their environment, and are demanding environmental justice!