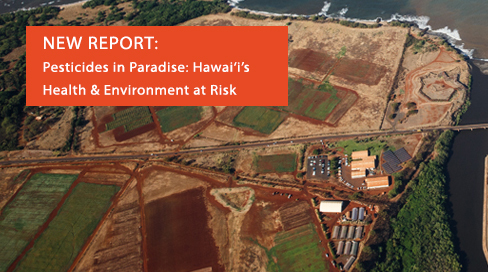 May 6, 2015 (Honolulu, HI)— Hawai‘i Center for Food Safety (HCFS) is set to release “Pesticides in Paradise: Hawai‘i’s Health & Environment at Risk,” a report that firmly establishes the relationship between pesticide use, genetically engineered (GE) field test sites, and public health risks in Hawai‘i.

“Pesticides in Paradise” delivers a comprehensive review of published scientific and medical research examining the threats pesticides used in Hawai‘i pose to public health, especially the risk to pregnant women and young children. The report also considers the severe impacts of pesticides on Hawai‘i’s ecosystems and the challenges the growing seed industry pose to local food self-sufficiency.

The report also provides readers with an easy to digest snapshot of the GE seed industry’s activities in Hawai‘i. Alarmingly, the GE seed industry’s footprint on the Hawaiian Islands (24,700 acres) is 72% of the total area planted to food crops other than sugarcane or pineapple (34,400 acres).  Since 1987 Hawai‘i has hosted more cumulative field trials (3,243) than any other state. In 2014 alone, 178 different GE field tests were conducted on over 1,381 sites in Hawai’i (vs. only 175 sites in California). Herbicide-resistance was the most frequently tested trait in GE crop field tests in Hawai‘i over the past five years. This means that plants genetically engineered in Hawai‘i, by and large, are engineered to resist greater and greater application of herbicides.

“We frequently hear that genetic engineering has nothing to do with pesticides, and that pesticides do not have an impact on our environmental and public health, but this comprehensive review tells a very different story,” said Ashley Lukens, PhD, Director of HCFS.

As revealed in the new report, one agrochemical company applied 90 different pesticide formulations containing 63 different active ingredients on Kaua‘i from just 2007 to 2012, and sprayed on two-thirds, or 65%, of the days of the year. According to data from the Kaua‘i Good Neighbor Program we know that some of the most dangerous restricted use pesticides on the market are being used year round, including atrazine, chlorpyrifos, and paraquat.

Lynn B. Wilson, PhD, a community advocate for young children who testified on behalf of the American Academy of Pediatrics (AAP), explains that “this report details many layers of agrochemical companies’ activities that use large amounts of toxic chemicals on a consistent basis throughout each year on almost every island, resulting in alarming health harms to communities, families, and particularly young children. The American Academy of Pediatrics has documented environmental toxins such as pesticides, herbicides, and fungicides used in Hawai‘i as being detrimental to healthy brain development in young children.”

In general farmers, farmworkers, pregnant women, and children are at greatest risk. Children in particular are more susceptible to the harmful effects of pesticides than adults. Studies show that pesticide exposure in utero and early life is linked to childhood cancers, neurobehavioral and cognitive deficits, adverse birth outcomes, and asthma. In adult populations, pesticide exposure has been linked to Non-Hodgkin’s lymphoma, bladder and colon cancers, Parkinson’s disease, depression, and disrupting our hormonal or endocrine systems.

Also detailed in the report is the deficient regulatory framework that allows for pesticide use near homes, schools, and hospitals and keeps vital information on pesticide use hidden from public view. Because of this lack of disclosure, the direct, indirect, and cumulative impacts on public health regarding the long-term intensive commercial agriculture and associated use of pesticides have not been properly or independently evaluated.

“With this report as a touchstone, we hope to build support for legislative measures to protect Hawai‘i’s citizens, particularly children, from harmful pesticide exposure,” said Lukens.

Wilson echoes the sentiment that this report fosters engagement on this issue moving forward; hoping that “professionals and policymakers will work together to protect the health of our community. Wilson says she hopes “Professionals working to support healthy fetal and early childhood development will especially want to stand up, take notice, and integrate this new report into their community education and policy efforts.”

To request a public presentation of the report by HCFS, please visit www.centerforfoodsafety.org/hawaii or call the Hawai‘i office at (808) 681-7688 ext 4. 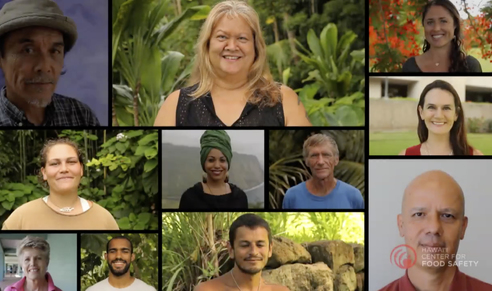