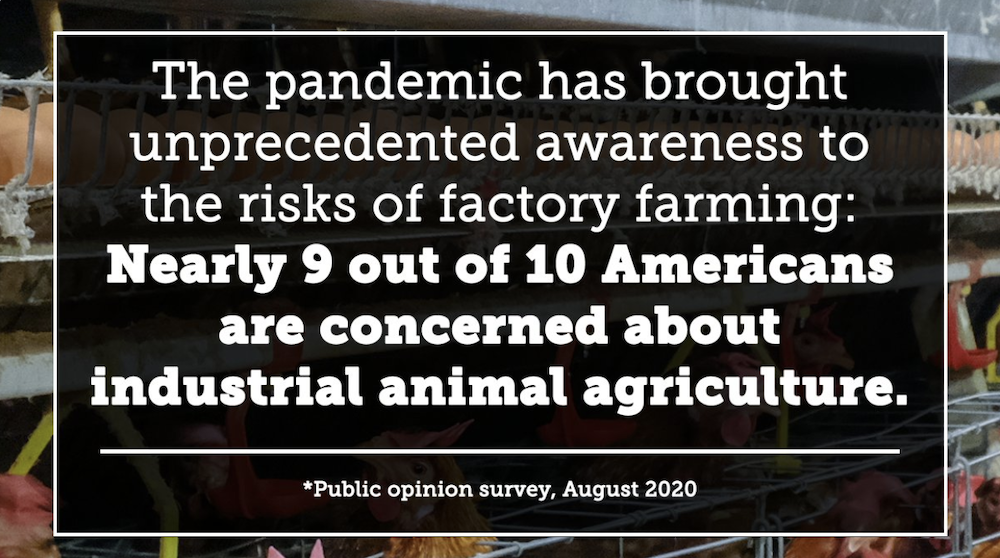 NEW YORK—Today the ASPCA® (The American Society for the Prevention of Cruelty to Animals®) released data from a new public opinion survey conducted by Lake Research Partners, showing that the COVID-19 crisis has elevated already high levels of concern about industrial animal agriculture and reinforced the links between inhumane treatment of farm animals and human health risks. Driven by stories that have emerged throughout the pandemic of abuses on industrial farms and slaughterhouses, consumers are seeking out alternatives to factory-farmed meat, eggs and dairy—and there is strong bipartisan support for policies that would check the abuses of factory farming.

The overwhelming majority of the public are concerned about the impacts of industrial animal agriculture on animal welfare, worker and human health, the environment and local communities. But notably, those with first-hand experience—farmers and their families—are not only more concerned about these impacts, they are also twice as supportive of reforms such as a ban on future factory farms than the public as a whole.

"The pandemic has further opened consumers' eyes to the fragility and cruelty of factory farming, and the fact that poor treatment of animals in industrial farms and slaughterhouses presents an enormous threat to public health," said Daisy Freund, Vice President of Farm Animal Welfare at the ASPCA. "This survey shows that the public is aligned with advocates for the protection of animals, workers, public health and the environment who are working with urgency and solidarity to reform industrial animal agriculture. Policymakers should listen to the American people and act urgently to address and prevent the horrific abuses of animals and workers that have occurred during the pandemic."

Key findings of the survey include:

— The vast majority (89%) of Americans are concerned about industrial animal agriculture – either citing animal welfare, worker safety or public health risks as a concern.
— 85% of farmers and their families support a complete ban on new industrial animal agriculture facilities–almost twice the support of the general public.
— 82% of respondents believe that the government should mandate slower slaughter speeds to protect workers, animals or public health, with a majority (61%) in support of reserving government funds for farmers whose practices are more humane, safe for workers, and reduce the risk of future pandemics.
— Two-thirds (65%) of the public reported that they believe poor worker protections and harsh working conditions increase inhumane treatment of farm animals, with more than half (57%) believing that this mistreatment increases public health risks.
— 72% of those surveyed who recently heard about animal welfare, worker safety or public health issues related to industrial factory farming reported purchasing less factory-farmed animal products since the start of the pandemic—either seeking out more local animal products, shifting to products with more assurance of animal welfare or consuming less meat, eggs or dairy.

At a time when the country is divided on a number of issues, most of these opinions and beliefs held true across political party, race, gender and regardless of whether the respondent lived in a rural or urban setting.

"These findings reaffirm that the vast majority of the public – not just workers - are deeply concerned by how frontline workers have been unnecessarily risking their lives to put food on our tables," said Christina Spach, National Organizer, Food Chain Workers Alliance. "The pandemic has only magnified the already life-threatening conditions inside meat processing and meatpacking facilities. We must hold companies accountable for the lack of basic health and safety protections for their workers and their profit-driven line speeds that will continue to endanger both worker safety and animal welfare beyond the COVID-19 crisis."

"The results of this survey show what we at SRAP see every day in our work: Those who have first-hand experience and knowledge about farming—farmers and their families—also suffer the most from industrial-scale animal agriculture operations in their communities," said Sherri Dugger, Executive Director at the Socially Responsible Agricultural Project (SRAP). "This poll reinforces that there is an urgent need to rein in this dangerous, destructive industry that is devastating farming families and rural communities across America."

"This report illustrates how grossly out of step regulators and industrial animal factories are with the public," said Ryan Talbott, staff attorney with the Center for Food Safety. "The public overwhelmingly supports a slow and more humane slaughterhouse process to protect animal welfare, worker safety, and food safety, yet USDA continues to massively increase slaughter speeds. USDA should protect food system workers, not line the pockets of producers by risking workers' lives and the public's safety from foodborne illness outbreaks."

Methodology: Lake Research Partners designed and administered the survey with 1,000 American adults over the internet from a national sample of internet users. The nationwide survey was conducted August 18 - 24, 2020.  The data were weighted slightly by gender, age, region, race, political party identification, and education to match known characteristics of the adult US population. In interpreting survey results, all sample surveys are subject to possible sampling error. With a sample of 1,000 the results of a survey would be within 3.1% of those which would be obtained if the entire population were interviewed; the sampling error is higher for sub-groups. The size of the sampling error depends upon both the total number of respondents in the survey and the percentage distribution of responses to a particular question.

During these challenging times, CFS stands with all of you…
Read More