Superbugs in Stock: Which grocery chains are acting to eliminate routine antibiotic use in their meat supply? 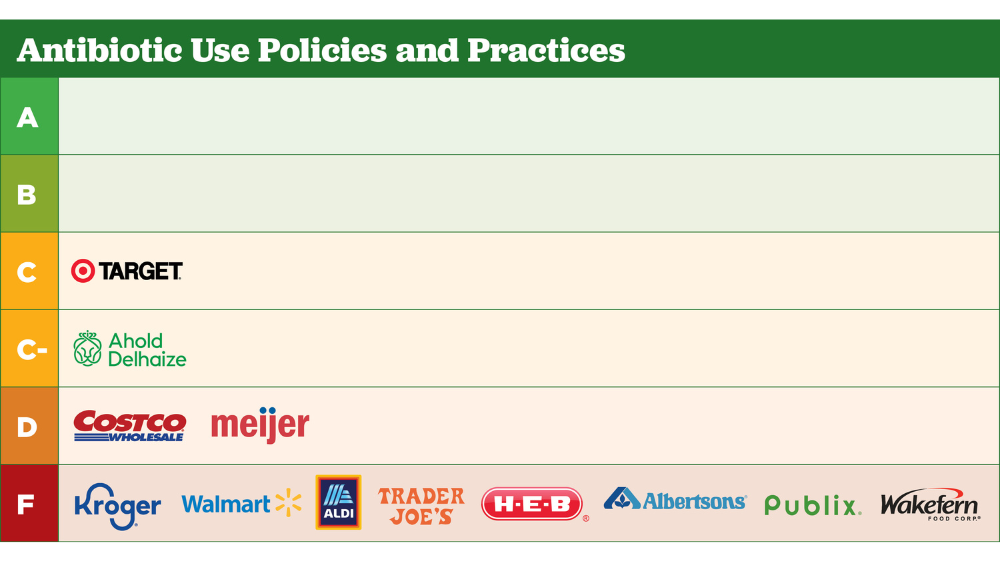 Eight of the 12 largest U.S. supermarket companies, including Walmart and Trader Joe's, received an "F" on a new report card grading corporate policies regarding antibiotic usage in their private label meat and poultry supplies, Superbugs in Stock, released by several members of the Antibiotics off the Menu coalition, reveals that most top U.S. grocery chains are failing to protect human and animal health by allowing suppliers to misuse antibiotics in their meat and poultry production. The report demonstrates that today, the grocery sector has taken inadequate action to help mitigate the spread of antibiotic-resistant bacteria, a global public health threat that has been called a "slow-moving pandemic."

Superbugs in Stock ranks the grocers by how well they minimize routine antibiotic usage in otherwise healthy animals. Some chains are doing significantly better than others, though researchers didn't give any of them grades in the "A" or "B" ranges. Target and Ahold Delhaize (owner of the Food Lion, Giant, and Stop & Shop brands) stand out as leaders in the sector with a "C" and "C- ", respectively, showing the dire need for greater progress overall.

No company received higher than a "C" in this report due to a lack of monitoring and reporting on antibiotic use even among companies with strong policies in place. This is critical for determining whether suppliers are actually complying with company policies, reductions in use are being achieved, and the health of farmed animals is being protected.