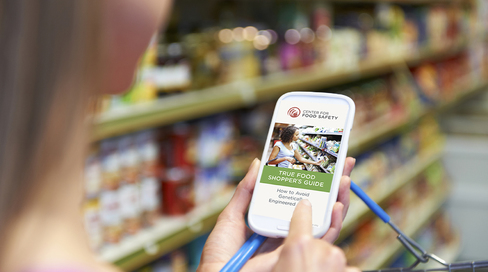 Which supermarket foods are genetically engineered? This is probably the most urgent question the public has about these novel foods. Opinion polls show that up to 90 percent of the American public wants GE foods labeled. But despite this overwhelming demand, almost no foods on U.S. grocery shelves reveal their secret, genetically engineered ingredients.

We’ve seen that our government, under pressure from the biotechnology industry, has not required the labeling of GE foods. And the biotech industry does not voluntarily identify them, fearing, probably correctly, that the majority of Americans would avoid GE foods if given a choice. As a result, the U.S. public has been deprived of its right to choose whether to buy and consume these engineered foods. However, this is not the case with most of our major trading partners around the globe who have instituted mandatory labeling of all GE foods and ingredients.

Our True Food Shoppers Guide to Avoiding GE Foods was the first of its kind, first published in October of 2000. In fact, the Shoppers Guide is what launched the True Food Network! The Guide is designed to help reclaim your right to know about the foods you are buying, and help you find and avoid GMO foods and ingredients.

How do you get our free Shoppers Guide to Avoiding GE Foods?

This Guide was compiled based on company statements sent to CFS and consumers; statements posted on company websites; and companies enrolled in the Non-GMO Project's Non-GMO verification program. As ingredients change frequently, always check the packages--even of foods you buy often--to be sure to avoid non-organic at-risk ingredients on products not labeled as Non-GMO.

More and more people are beginning to understand that what we put on our food, land and water ends …Read More