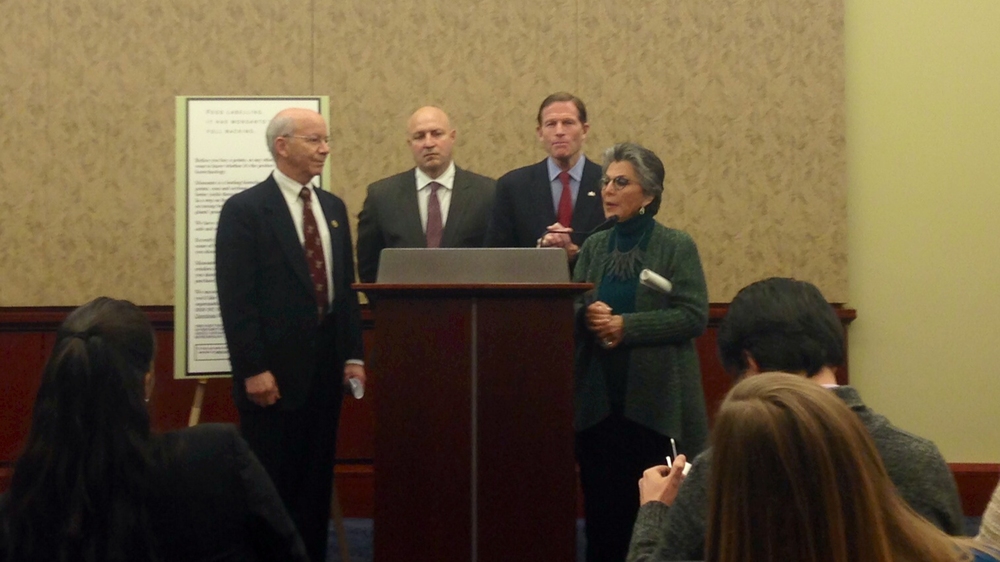 Washington, DC – Chef Tom Colicchio joined Sens. Barbara Boxer (D-Calif.) and Richard Blumenthal (D-Conn.) and Rep. Peter DeFazio (D-Ore.) today as they reintroduced bipartisan legislation that would give Americans more information about what’s in their food and how it was produced.

The bill – titled the Genetically Engineered Food Right-to-Know Act – would direct the Food and Drug Administration to require that food manufacturers label foods that contain genetically modified ingredients (also called GMOs). It was reintroduced in both the Senate and the House.

“We cannot continue to keep Americans in the dark about the food they eat,” said Rep. Peter DeFazio. “More than sixty other countries make it easy for consumers to choose. Why should the U.S. be any different? If food manufacturers stand by their product and the technology they use to make it, they should have no problem disclosing that information to consumers.”

“The public wants more information about the food they are buying and how it’s grown,” said Colicchio, owner of Craft Restaurants and co-founder of Food Policy Action. “I applaud Senators Boxer and Blumenthal and Representative DeFazio for their leadership and urge their colleagues to join them in standing up for the 93 percent of Americans who want to know whether their food has been genetically modified.”

Advocates from Food Policy Action, Environmental Working Group, Just Label It and Center for Food Safety were on hand to thank Sen. Boxer, Sen. Blumenthal and Rep. DeFazio and to urge Congress to act on the legislation. Pro-labeling groups have helped to collect more than 1.4 million signatures on a petition to the FDA demanding the right for consumers to know what’s in their food.

Colin O’Neil, director of government affairs at the Center for Food Safety, said, “In the 13 years that FDA has allowed companies to voluntarily label foods produced using genetic engineering, not one single company has done so. Consumers want to know more than ever how their food is produced, and a mandatory GE food labeling bill will give consumers the information they’re looking for while balancing the need by companies for a national labeling standard.”

Earlier this week, farmers flew in to Washington from across the country to lobby Capitol Hill for GMO labeling legislation. Many growers have turned to more toxic herbicides for use on crops genetically engineered to withstand herbicides such as glyphosate. Overuse of glyphosate has led to the growth of “super weeds” that require farmers to use even more toxic herbicides that have been linked to cancer, Parkinson’s disease and reproductive problems.

“Under the leadership of Sen. Boxer, Sen. Blumenthal and Rep. DeFazio, our elected officials have the opportunity to provide clear, transparent information to Americans who simply want to know whether their food has been genetically modified,” said Katrina Staves, campaign manager for Just Label It.

“The industry promise that planting GMO crops would reduce the need for harmful weed killers has been broken,” said Mary Ellen Kustin, EWG senior policy analyst. “We’ve run the first 20 years of the GMO experiment and now know that in fact GMOs require more herbicides over time. With even more toxic compounds like 2,4-D and dicamba being approved for use on GMO crops, consumers should be able to make informed decisions about what food they’re buying.”

Labeling opponents are pushing a bill that would pre-empt GMO labeling laws already in effect in Vermont, Maine and Connecticut, as well as pending legislation in more than 20 other states.