The Monsanto Protection Act is Back, and Worse Than Ever 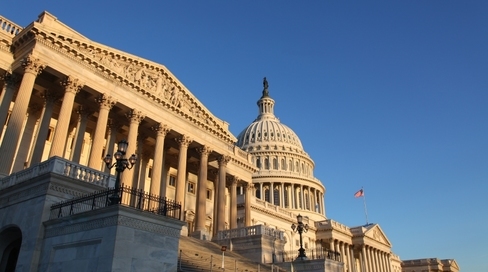 June 15, 2015 (Washington, D.C.) - Center for Food Safety (CFS) today expressed strong opposition to Representative Pompeo’s newly revised genetically engineered (GE) food labeling preemption bill (H.R. 1599), which now has been greatly expanded to not only prohibit all labeling of GE foods, but also to make it unlawful for states or local governments to restrict GE crops in any way. These new provisions would not only prohibit any future state and local laws, but also undemocratically nullify GE crop regulations that have existed in numerous counties across the country for over a decade. The bill would also further weaken already weak federal regulation of GE crops, while at the same time forbidding local communities from opting to protect their citizens, their farmers, and their environments. The bill draft will be discussed at a House hearing on Thursday.

“The Monsanto Protection Act is back, and it’s even worse than before. This bill would strip away a state or local government’s basic rights of local control, and hands the biotech industry everything it wants on a silver platter. No Member of Congress that cares about the rights and concerns of his or her constituents should support this bill,” said Andrew Kimbrell, executive director at Center for Food Safety.

Earlier versions of Rep. Pompeo’s bill, known as the “Denying Americans the Right to Know Act” or DARK Act, preempted states’ rights to require the labeling of GE foods, and this version continues that: It would overturn state labeling laws that have passed in Vermont, Connecticut, and Maine, and stop any future laws from passing. CFS has been a champion of GE food labeling for over two decades, and in the past 2 years, over thirty states have introduced laws requiring the labeling of GE foods. 64 countries around the world require GE food labeling and have not reported higher food costs as a result. Last month, a federal court in Vermont resoundingly rejected industry’s challenges to Vermont’s labeling law, scheduled to take effect next year, becoming the first court to conclude that states do have the right to label GE foods under current law.

However, that’s not all the bill would do: while keeping language preempting labeling, the new Monsanto Protection Act would also forbid states and local governments from any sort of oversight of GE crops, even when the federal government has declined or failed to regulate them. CFS has long supported the ability of states and counties to create GE-free agricultural zones in order to protect traditional farmers from GE contamination as well as communities from exposure to associated pesticides. Many local government ordinances restricting GE crops have been in place for over a decade, in states such as California, Oregon, Washington, and Hawaii. Just this past month, a court upheld a Jackson County, Oregon law establishing a GE-free zone. This and numerous other state and county ordinances would be voided by the new bill. Finally, the bill would further weaken federal regulation of GE crops at USDA and FDA, while forbidding state and local regulation to fill the oversight gaps left, as described above.

“Monsanto and the biotech industry are the ones steering this ship,” said Colin O’Neil, director of government affairs at CFS. “The labeling of genetically engineered foods is already one of the most hotly debated issues on Capitol Hill. This unholy marriage of the Monsanto Protection Act and the DARK Act will certainly be a lightning rod.”

This is not the first time the biotechnology industry, led by Monsanto, has tried to get its way through legislative maneuvering. In 2012 it helped tack on the original "Monsanto Protection Act" to an appropriations bill, which would have stripped federal courts of their authority to halt the sale and planting of an illegal, potentially hazardous GE crop and compel USDA to allow continued planting of that same crop upon request. Due to massive opposition from the public, the corporate rider was ultimately stripped out in a subsequent spending bill in September 2013.

Center for Food Safety is calling on lawmakers to reject this marriage of the DARK Act and Monsanto Protection Act.