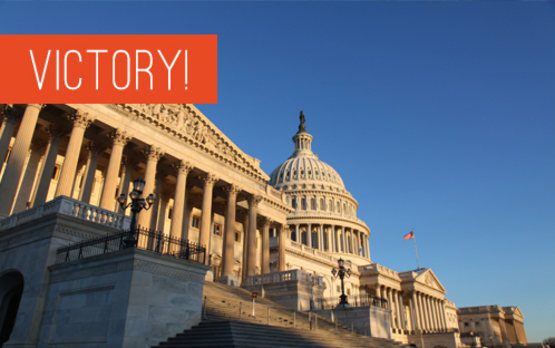 Today the Deny Americans the Right to Know (DARK) Act failed to garner enough votes for cloture by a vote of 49-48, effectively defeating the bill.  The bill introduced by Senator Roberts (R-KS) faced bi-partisan rejection.  The bill would have preempted the genetically engineered food labeling laws in Vermont, Connecticut, Maine and Alaska.  In its place it would have put a voluntary labeling scheme that relies primarily on QR codes, websites and call in numbers to inform consumers about the presence of GMOs.

“The defeat of the DARK Act is a major victory for the food movement and America’s right to know,” said Andrew Kimbrell, Executive Director of the Center for Food Safety. “It also is an important victory for Democracy over the attempt of corporate interests to keep Americans in the Dark about the foods they buy and feed their families.” Kimbrell concluded.

Only 64 percent of Americans own a smartphone. That means that more than a third of all Americans will not be able to use this ersatz form of labeling. Moreover, as one would expect, those left out are disproportionately the poor and those living in non-urban areas. According to Pew Research Center, only 50% of low income people in the U.S. own a smartphone and only 52% of people living in rural areas own a smartphone. And even those who own smartphones are not guaranteed consistent access to the internet, and far fewer than that have ever used a QR code - less than 20 percent. Smartphones and data plans are expensive, and nearly half those who have smartphones have had to shut off their service at some point due to financial hardship.

Center for Food Safety sent a letter to all members of the Senate pointing out that the Robert’s bill was discriminatory against low income and  rural Americans, minorities and the elderly, in that large percentages of these groups do not even own smartphones. Accordingly a legal analysis provided by CFS to the Senate indicated that the bill was potentially unconstitutional and a violation of equal protection under the law. The CFS letter also noted that no consumer would ever have the time to check all their products through call in numbers or QR codes and that the bill was in fact a non-labeling bill under the guise of a labeling bill.  The bill also raised serious question about consumer privacy.

"QR code labeling discriminates against the poor, minorities, rural populations and the elderly. They are a completely unacceptable substitute for clear, concisely worded on package labeling," said Andrew Kimbrell, executive director at Center for Food Safety. "The right to know is a right for all, not just those who can afford it.""‹

With Vermont’s GE labeling law set to go into effect July 1 2016, big food and biotechnology interests have attempted to block its implementation, both through the courts and in Congress. The industry has for months sought action by Congress that would preempt states from passing GE labeling laws. Such a bill, called the DARK Act by labeling advocates, passed in the House of Representatives this summer.

Opponents of mandatory GE labeling frequently cite significantly higher food costs as part of their rationale, however, the higher numbers they reference are based on the assumption that manufacturers will incur costs by switching to non-GE ingredients.  This is a false assumption and should not be equated with labeling costs.  Such a move would be the result of market pressures, not labeling mandates. 64 countries around the world require GE food labeling and have not reported higher food costs as a result.

In January, Campbell’s broke with the Grocery Manufacturers Association, which has long opposed mandatory GE food labeling and is currently under legal scrutiny for its multimillion dollar campaign to fight Washington State’s GE food labeling ballot initiative. The iconic soup company instead announced that in the interest of its consumers, it would label all of its products containing GE ingredients. In an interview with The New York Times, a Campbell’s spokesperson “noted that adoption of the 1990 Nutrition Labeling and Education Act, which required companies to add nutritional information to their labels, did not significantly raise costs.”

By an overwhelming margin, American voters say consumers should have the right to know if their food is genetically modified, with 89 percent in support of mandatory GE labeling, according to a new national poll. Nearly the same number of consumers would like to see the labels in an easy to read format, not via a barcode or other technology.

More than 30 states introduced legislation to require GE labeling in 2013 and 2014, with laws recently passed in Vermont, Connecticut and Maine.