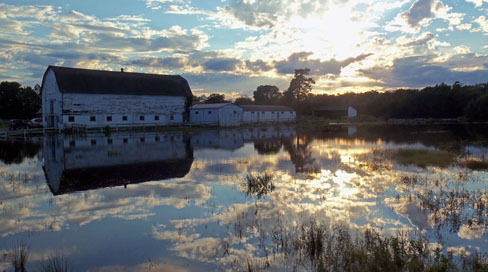 Salt and pepper, bread and butter, rice and beans: some things are just meant to go together.  And while it might not be the first thing that comes to mind, soil and water are meant for each other, too.  Soil has the power to clean and store fresh water, and without moisture, soils dry up and cannot sustain microbial, plant, or animal life.

Healthy soils have structure—a network of large and small air and water passages, or “pores”—to hold water in place.  The presence of soil structure makes it possible for plant roots to grow down deep and hold soil in place while allowing water to permeate the soil.  This allows soils to better store groundwater and also prevents flooding.  Plants with deep-rooted systems, like perennials, can store water deeper in the ground than other plants.  Functioning soil structure also protects against the escape of fertilizers and pesticides into groundwater.

Deep tillage operations such as plowing loosen up soil initially, but they also speed up decomposition of organic matter through exposing it to oxygen.  As intensive tillage over years reduces the organic matter content of the soil, it loses structure and becomes more vulnerable to compaction, exacerbated by heavy farm equipment.  Compaction eliminates pores and therefore reduces the ability of soils to absorb and drain water.  Pesticides also contribute to soil compaction by killing microorganisms that help build soil structure.  Ultimately, compaction leads to erosion and flooding because the water can’t find its way down into the soil.  Erosion is a threat to farmland across the globe, including the United States.

The addition of organic, or carbon-based, materials to soils enhances their water-holding capacity.  This makes plants more tolerant of drought, more resistant to erosion, and more stable under temperature extremes.  This buffering capacity of soils that are rich in organic matter is becoming ever more important as climate change poses new challenges to farmers around the world.