Glyphosate, the active ingredient in Monsanto's Roundup, is the most widely-used pesticide in the United States. Its use has increased exponentially since the 1990s, when Monsanto released its genetically engineered (GE) "Roundup Ready" crops that are resistant to glyphosate. Today, 280 million pounds of glyphosate are sprayed annually on 285 million acres of U.S. farmland—the size of nearly three Californias (see graphs). Over 21 million more pounds are sprayed by homeowners, on roadways, in forestry, and for other non-agricultural uses.

Glyphosate and Roundup once had an aura of safety thanks to Monsanto's relentless fraudulent advertising. Monsanto also pressured EPA into reversing its 1985 classification of glyphosate as a possible carcinogen. Since 2015, when international cancer authorities determined glyphosate is "probably carcinogenic," science has prevailed and today it is generally accepted that glyphosate causes cancer.

Juries have ruled that cancer victims' exposure to Roundup helped cause their non-Hodgkin lymphoma (NHL) in three cases; approximately 100,000 more such cases were settled by Bayer (which acquired Monsanto in 2018) for roughly $10 billion; other NHL cancer victims continue to sue. Glyphosate also adversely affects the liver and kidney, based on older studies EPA now ignores. Despite this evidence, in its 2020 registration decision for glyphosate, EPA rubber-stamped Monsanto's assurance of safety—to the detriment of farmers and farmworkers who bear the most exposure.

Glyphosate's intensive use means it is found throughout the environment—in soils, streams, lakes, wetlands, and even in the atmosphere and rainfall—causing significant ecological harm. It indiscriminately kills plants that many species rely on for food and habitat, and is directly toxic to certain animals.

Glyphosate is a major culprit in the decline of the iconic Monarch butterfly—prolific spraying in America's farm fields has nearly obliterated the common milkweed plant that Monarchs rely on to reproduce in their Midwest breeding grounds. Monarchs have consequently been driven so near to extinction that the U.S. Fish and Wildlife Service, in response to a petition from CFS and allied groups, intends to grant Monarchs Endangered Species Act protection in 2024. Glyphosate-containing Roundup formulations are also extremely toxic to tadpoles and frogs and likely contribute to the ongoing worldwide decline in amphibian populations.

EPA itself recently found that glyphosate is likely to adversely affect an astonishing 93% of threatened and endangered species—no fewer than 1,676 species of birds, mammals, fish, plants, amphibians, insects, and more.

The dramatic increase in glyphosate use with GE crops has created a proliferation of glyphosate-resistant "superweeds" infesting 120 million acres of U.S. farmland. An agronomist said these weeds are the greatest threat to cotton production since the boil weevil, while corn and soy farmers spend over $5 billion more to control them (pp. 49-51).

Seed-pesticide firms have responded to the superweed debacle by introducing new GE crops resistant to additional pesticides like dicamba and 2,4-D. As CFS predicted over a decade ago, the result has been rising use of these toxic chemicals, rampant, crop-damaging drift, and increasingly resistant weeds. 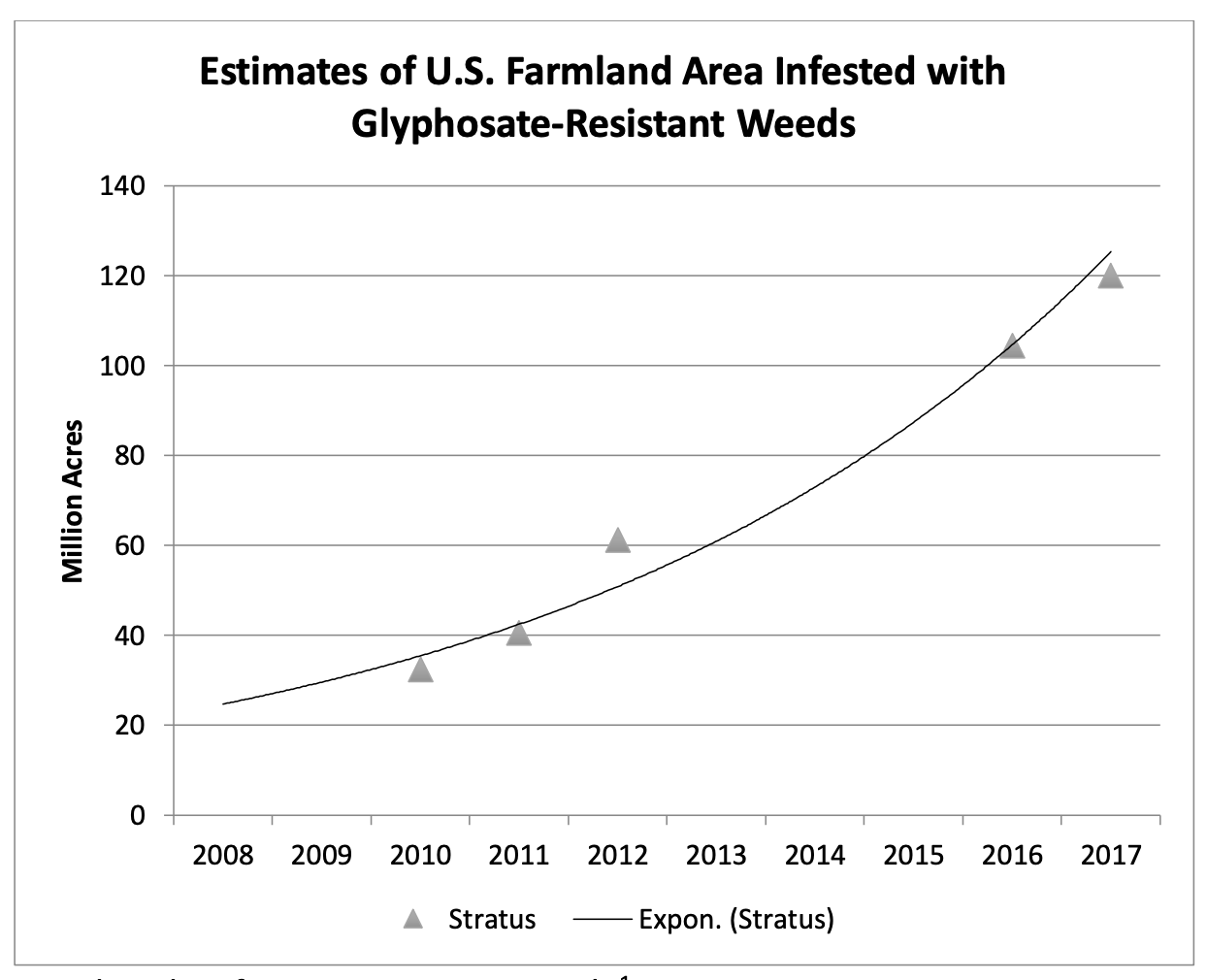 Based on data from Stratus Ag Research and Croplife

Center for Food Safety (CFS), on behalf of environmentalists and farmworkers, has challenged EPA's 2020 glyphosate registration decision in court. The case challenges EPA's determinations that glyphosate is safe for farmworkers as well as endangered species and the environment more broadly. Specifically, plaintiffs argue that EPA discounted strong evidence that glyphosate causes non-Hodgkin lymphoma, and failed to assess occupational exposure to real-world products, including the risks to farmers and farmworkers like those CFS is representing in the case. Petitioners also challenged EPA's decision based on risks to the environment and imperiled species, like the Monarch butterfly, and the Agency's failure to consider the many costs of glyphosate use.