Neonicotinoids are potent insecticides that threaten pollinators as well as aquatic organisms, birds, and mammals, including humans. Chemically similar to nicotine, they kill insects by disrupting their nervous systems. Introduced in the 1990s, neonicotinoids have rapidly become the most widely used insecticides in the world. The major "neonics" are acetamiprid, clothianidin, dinotefuran, imidacloprid, and thiamethoxam, while sulfoxaflor belongs to a related subclass.

Neonicotinoids can be sprayed or applied to soil, but 5 of every 6 pounds are coated onto the seeds of corn, soybeans, sunflowers and a wide range of other crops grown on several hundred million acres in the U.S. alone. Yet incredibly, EPA exempts treated seeds from regulation. READ MORE HERE >> 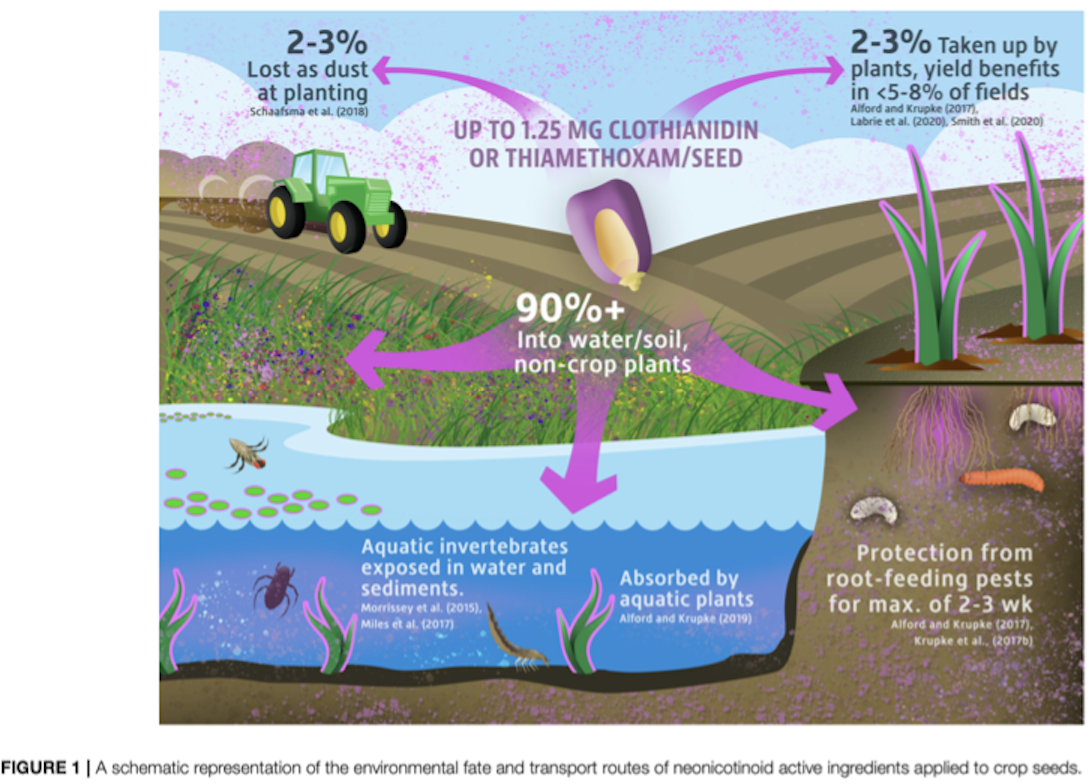 Source: Krupke CH and Tooker JF (2020).  Beyond the Headlines: The influence of insurance pest management on an unseed, silent entomological majority. Frontiers in Sustainable Food Systems 4:595855. 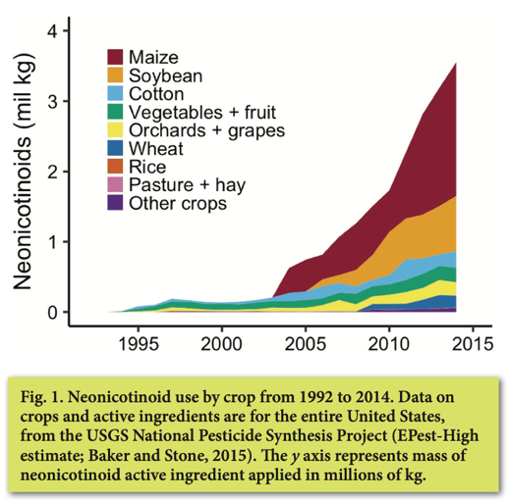 The neonic seed coating is absorbed by the growing seedling and makes the entire plant toxic. Bees and other pollinators are harmed by exposure to neonic-contaminated nectar and pollen, with studies demonstrating disruptions in flight ability, impaired growth and reproduction as well as weakened immunity. Neonic-contaminated seed dust generated during planting operations causes huge bee kills, while pollinators also die from direct exposure to spray. Neonics are also persistent (break down slowly), and run off into waterways, threatening aquatic organisms. EPA recently determined that neonics likely harm all 38 threatened and endangered amphibian species in the U.S., among many other organisms. Birds are also at risk, and can die from eating just one to several treated seeds.

Human toxicity based on animal studies

Neonics are frequently found in surface and ground water, including wells, and animal studies show that high doses cause neurological impairment. Even at very low levels, imidacloprid is an obesogen, a chemical that promotes accumulation of body fat.

Neonicotinoids, along with other pesticides, habitat loss, parasites, and other factors are implicated in alarming reductions in insect populations around the world. Insects are suffering "death by a thousand cuts." For instance, researchers found a 76% decline in the abundance of flying insects in German nature reserves from 1989-2016. The European Union partially (2013) then completely (2018) banned neonicotinoids because of their dire threats to insects.

In 2017, Center for Food Safety (CFS) filed a petition with EPA asking the agency to stop exempting neonicotinoid coated seeds from pesticide registration. Five years later, EPA had still not responded to that petition, so CFS filed a lawsuit asking the court to compel an answer from the agency.

In 2018, after a 5-year legal battle, CFS secured the cancellation of a dozen neonicotinoid products in a settlement agreement with EPA in 2018.

In 2019, CFS challenged the government's decision that allowed neonicotinoid use on National Wildlife Refuges. CFS also sued EPA over its registration of sulfoxaflor for use on over 200 million acres of crops.

In 2020 and 2021, CFS submitted comments challenging EPA's proposed decision to re-approve the major neonicotinoids, and the agency's deeply flawed evaluation of their impacts on threatened and endangered species.