Coated seeds are crop seeds that have been treated with systemic pesticides, most commonly neonicotinoid insecticides and one to several fungicides, such as metalaxyl and difenoconazole. These potent chemicals are absorbed by the growing seedling and infuse the entire plant—from its roots to its fruit to its pollen—making it toxic to birds, bees, and other organisms.

Once limited to fruit and vegetable crops, neonicotinoid seed coatings have become near universal for major field crops over the past two decades, with treatment of corn, soy and wheat seeds driving overall neonic use to 3.6 million kg (8 million lbs.) per year by 2014 (Fig. 1). Yet numerous studies show that seed treatments provide little or no yield benefit. Farmers often have little knowledge of seed treatments, and often have trouble accessing "bare" seeds.

Bees and other pollinators are most at risk from neonic seed treatments; they suffer impaired reproduction, weakened immunity against parasites, and disrupted nervous systems from exposure to neonic-tained pollen and nectar. Certain fungicides that are coated on seeds or sprayed suppress bees' detoxification systems, making neonics even more toxic. 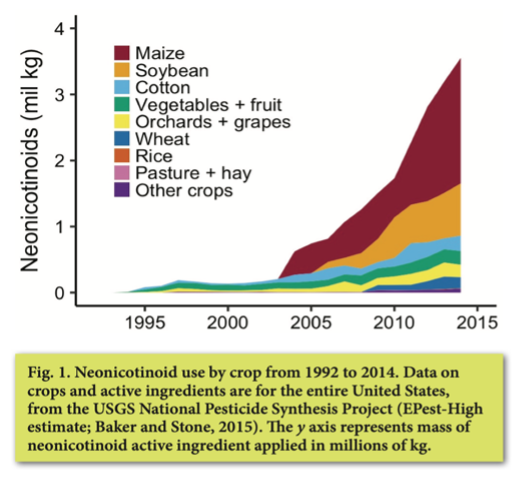 Neonicotinoids also cause massive bee kills, which occur when the coating abrades from the seed into talc or other lubricant in the seed planting box, and this dust is expelled and broadcast across the landscape during planting. Because the plant absorbs only 2-3% of the seed coating, neonics wash off the seed into the soil and waterways, threatening aquatic organisms. A tiny grain of neonic-coated wheat or canola can fatally poison a bird. Just one genetically engineered corn seed coated with neonics contains enough pesticide to kill over 80,000 bees.

The processing of surplus coated corn seeds in an ethanol plant created an "environmental catastrophe" in the village of Mead, Nebraska, where the land and water has been poisoned with neonics, decimating bee colonies, killing fish and frogs, and sickening residents.

Coated seeds continue to threaten the environment in part because EPA fails to regulate them properly at the federal level. EPA uses a loophole known as the "Treated Article Exemption" to avoid registering coated seeds as pesticides, meaning there is little to no oversight once the seeds have been treated, giving rise to events like the poisoning of Mead, Nebraska. Thanks in part to the exemption, neither EPA nor any government agency tracks the amount of neonicotinoids deployed as seed treatments.

In 2017, Center for Food Safety (CFS) filed a petition with EPA asking the agency to amend its regulations and close the Treated Article loophole. Five years later, EPA has still not responded to that petition, so in 2021 CFS filed a lawsuit asking the court to compel an answer from the agency. EPA has agreed to answer in fall 2022.